The Right Attitude – Failure Is Never an Option

One of the most important traits of any successful person is one of total commitment and passion for what it is that they are doing. They see their goal; they devise a plan for reaching it; and, the set about doing what is necessary to attain that goal.

This is something that has been repeated in uncountable books on success and personal achievement as-well-as here in this newsletter. I have written and re-written about it – I have spoken and reiterated my points again and again in class. But still, I see my students and others that I care about settling for average results and the unfortunate habit of excuse-making.

Why is this so?

I believe that it is due to our need to have a ‘back-up’ plan should we not succeed.

If we have set a realistic goal (growing gills and moving in with our goldfish is not a good example!), we have worked out a plan of action, and, we are prepared to do what’s necessary, why then would we need a plan of action should we not succeed?!

Now, I’m not being funny, or mean, or unrealistic. What I am doing is pointing out what I, and from what I have been able to find out about the psychology of success, every other successful person sees as a ‘flaw in logic.’

The flaw is in the understanding of ‘having a back-up plan if we don’t succeed.’ If we don’t succeed at what? If we’re following the plan and we’re on track, aren’t we getting at least closer all the time? And if not, what IS happening that is preventing us from reaching our goal – not enough time, an unforeseen circumstance, lack of experience, knowledge, or resources?

The point here is that, very often, we set ourselves up for failure by designing something into the equation that will make it OK to fail. I don’t mean that we necessarily set out to fail, just that we provide an excuse before we need one.

Here’s an example. My son has a goal to enlist in the Navy. He is doing this to gain both knowledge and experience for a future job with a major airline as an aircraft engine mechanic. He has set up the necessary interviews, obtained the requirements for enlistment as-well-as those for getting the job that he is after. Unfortunately, he is overweight and as a result, will have to lose weight or, at the very least, get to a point where his measurements meet the minimum standards. He has set one date after another for the enlistment but has not lost enough by each date to qualify for enlistment.

A friend of his, someone who is very concerned about his welfare has suggested heavily that he start looking for an apartment, as-well-as gathering information about car insurance, etc., just in case he doesn’t meet his latest goal. The idea being that he will have a back-up plan should he not make it.

A look at this story should bring one very important question to mind:

“What is the goal here?”

Is the goal to begin a career in the Navy or to move out on his own? While both would accomplish the latter, this is not the goal. And the so-called back-up plan does not contribute to the attainment of that goal. In this scenario, failure – not attaining the desired goal – has been wired into the equation.

The point is not whether or not to have a back-up plan but to make sure that any such plans contribute to the accomplishment of the goal. This is more aptly called a ‘contingency plan.’

Why was he not able to enlist by those other dates? Setting an unrealistic time to accomplish the task? Not carrying through on what needed to be done? These are questions that a contingency plan will handle.

In these cases, his so-called back-up plans would include: moving the date, recommitting to the goal, giving himself a worse-case alternative as an incentive to achieving the goal, etc.

The idea here is that we need to clearly understand the goal and what we want to get. Then, any back-up or contingency plan would work to go over, under, around, or through any obstacles that popped up. It would not cause us to drop our goal and drastically change what we are doing as ‘just another option.’ 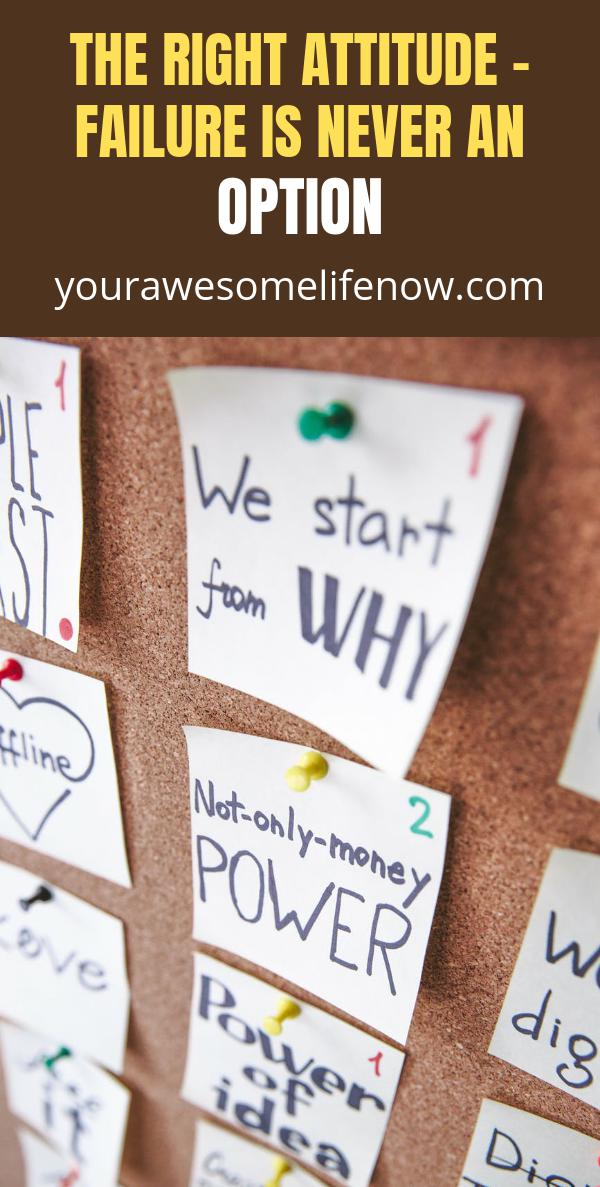 ..failure is never an option!